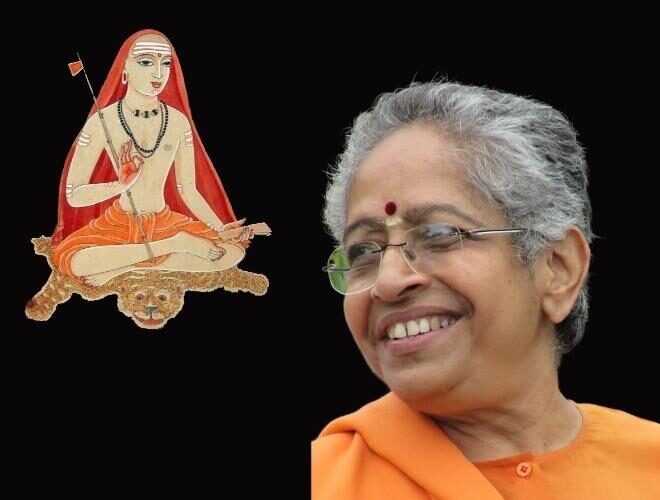 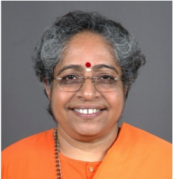 Swamini Brahmaprakasananda Saraswati is a disciple of Pujyasri Swami Dayananda Saraswati, the founder of Arsha Vidya Peetham (Rishikesh) and Arsha Vidya, group of institutions present all over the world . She came to be the disciple of Pujya Swami Dayanandaji from a very young age. In her poorvashrama she had many years of clinical practice after her M.D. in Obstetrics & Gynaecology. She also pursued the study of Paniniyam Vyakaranam and other texts for nearly 12 years from Shri. Bhandari, a Sanskrit scholar from Dahanu - Maharashtra. She joined Arsha Vidya Gurukulam, Anaikatti - Coimbatore, for a long term course in 1990. She was also a Sanskrit teacher in this course. After that, she continued to teach Vedanta and Sanskrit and administrator the following courses at the Anaikatti Gurukulam, under the guidance of Pujya Swamiji and the Acharya Swami Siddhabodhanandaji. In 2001 when Pujya Swamiji started a Gurukulam at Vedapuri, Nagpur - Maharashtra, at the request of Dr. Shrikant Jichkar, she was sent as the main teacher and as administrator of the place. Since then, she is the Chief Acharya of Dr. Shrikant Jichkar Memorial Arsha Vijnana Gurukulam. She has conducted three long term courses in Vedanta and Sanskrit with three years of duration each, in the Nagpur Gurukulam. The fourth long term course in Vedanta and Sanskrit is going towards the end of the third year. She was also awarded the title of Mahamahopadhyaya by Kavikulguru Kalidas Sanskrit University, Ramtek.