Visnu and Rudra - the prominent ones in the world - made their abodes there along with the lotus-born (Brahma). The whole world has made its abode there. The country is meritorious and the holiest. 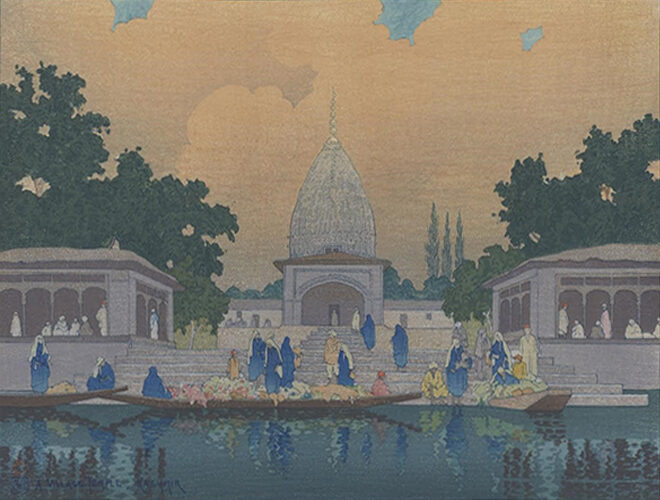 Of the various culture and thought centres that have impacted Bharat, Kashmir has been a huge source of many creativity-generating and paradigm-shifting offerings. Different poetic works from the rest of ancient and medieval India mention Kashmir/Sharada Peetha as the yearned destinations or dream locations for their characters. Folk narratives from the rest of India have kings, princes, and princesses of Kashmir as their celebrated characters. Itihasas and Puranas from the rest of India praise the maahaatmya of the tirthas and Kshetras of Kashmir. Besides hosting several punya tirthas and punya sthalas that have attracted the rest of Bharat for ages, Kashmir has also sent seekers to the rest of Bharat. Sharada Desh has been a center of learning for traditional knowledge systems from other regions and has sent learners to similar centres of learning across the country. There has been a continuous exchange of learning and learners between Kashmir and the rest of Bharat.

Kashmir has been mentioned in Panini’s Asthadhyayi, Mahabharat, Puranas and Brihat Samhita (Kumari, 1968). Patanjali, Abhinavagupta, Vishnu Sharma, Bilhana, Kalhana and Bhamaha are some of the eminent scholars from this region. Vasugupta’s Shiva Sutra is an important text of the Advaita tradition of Kashmir Shaivism. According to Kalhana, the first known king of the region was Gonanda (in 1000 BC). The Native king of Kashmir who minted coins in the early 6th century was Pravarsena. In Nilmat Purana, sage Vaisampayana tells king Janmayjeya that the Goddess Uma is the same as Kashmira and that the holy region of Kashmira is possessed of all sacred places. The entire region of Kashmir is described as a Maha Teertha in Nilmat Purana, with every inch of land akin to a Teertha. Sharada Peeth was regarded as a great center for learning. Alberuni mentions Devi Sharada in his account of the most famous idols of the Hindus, right after the image of the Surya Deva at Multan, Vishnu Cakraswamin of Thanesvar and the Linga of Somnath (Kalhana’s Rajatarangini, 1900/2007).

Kalhana’s Rajatarangini indicates that people from various regions of the modern-day India would come to Kashmir for pilgrimage and/or studies. There were special Mathas for people from different regions. Sharada Desh Kashmir was known as Second Benares for the kind of knowledge and learning that emanated from the region. The impact of Kashmiri researchers, philosophers, scholars, and practitioners in various fields of study has contributed to human civilization in various forms. Several works like “Contribution of Kashmir to Sanskrit Literature” by Dr K S Nagarajan (1970) substantiated the contribution of Kashmir in the areas of Poetics, Poetry, Philosophy, Tantra, ancient Indian History-writing etc.

Aalankaarikas from Kashmir have contributed the largest number of paradigms of Sanskrit poetics such as the theories of Rasa, and kaavyaatma /kaavyajeevita paradigms of Dhvani, Vakrokti and Auchitya, among others. What came to be known as Kashmir -Shaivism is the most robust overarching system of theory and practice that has impacted the Shaakteya, Sri Vidya, Kerala Tantra and several other traditions of theory and practice, throughout the length and breadth of our sacred geography. Through the work of Abhinavagupta, the polymath from Kashmir, this system became the integrator of multiple fields such as Shaastras of Naatya, Kaavya, Yoga, Vedanta, and Tantra.

Adi Shankara from Kerala made Sharada Peetha of Kashmir as his final destination of digvijaya yaatra. While leaving an indelible mark on Kashmiri people’s spiritual culture, he brought Sharada and Chandramauli from Kashmir to the four Aamanaaya Peethas established by him in the four corners of India.

To celebrate the integral significance of Kashmir for the rest of Bharat and vice versa, INDICA is organizing a conference in the month of September 2022. This is a call for papers from students, scholars, experts, and public intellectuals. The conference is being curated by Dr. Nagaraj Paturi, Senior Director – INDICA and Dimple Kaul, Servant Leader – INDICA Courses.

We invite papers focusing on the theme of the conference, across various fields of study such as History, Philosophy, Linguistics, Literature, Art etc. Participants could also share their research on specific sub-themes such as the contribution of Kashmir to Sanskritik civilization, Kashmir Shaivism, Energy centers in Kashmir, Shiv Sutras etc.

Include name (spelled out as it would be cited), affiliations and e-mail addresses and contact numbers after the paper title (the contact details (email/mobile number) will not be published but may be needed as contact information during the process).

If the paper includes any excerpts from copyrighted works (including websites) such as illustrations, tables, animations, or text quotations, it is necessary for the author to obtain permission from the copyright holder (usually the original publisher).