Leading a Life in Yoga, in the light of Bhagavan Ramana Maharshi

Shri Ramana Maharshi (1879 thru 1950) endorsed all the four major paths – Karmayoga, Bhaktiyoga, Jnānayoga and Rājayoga – for attaining liberation. He highlighted the erasure of ego as the ultimate outcome of all these spiritual practices. Under Rājayoga, he especially laid emphasis on prānāyāma and prāna-veekshana. While respecting all the eight limbs of Patanjali’s system, he remarked that breath control can bring a high degree of quietude of the mind, which then can facilitate the search for the True Self (ātmā). It is indeed fascinating to learn from Ramana’s teachings about dissolution (laya) and destruction (vināsha) of the mind (of the separate self). 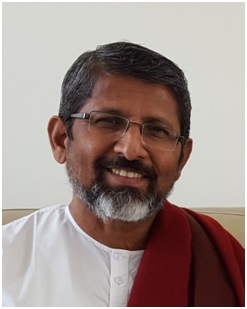 Swami Chidananda has been a Vedanta teacher and speaker on human values for more than three decades. After he served for 5 years as the resident Vedanta teacher in San Jose, California, in the mid-1990s, his work has been mostly in India and the USA. Since 2006, he heads FOWAI FORUM, a non-profit that disseminates philosophical and spiritual knowledge with special coverage of Indian ethos. Numerous talks by him are on YouTube at the FOWAI channel. The author of seven books, he is specially known for his presentations on Bhagavad Geeta and the Upanishads. Hailing from Udupi district in Karnataka, he has been living in Solan, Himachal Pradesh, since 2013. He had begun with a career in electronics engineering, with a BE from Mysore University and an MTech from IIT Madras. Then he served Chinmaya Mission, the organization of Swami Chinmayanandaji, for 18 years and the Foundation of Jiddu Krishnamurti for 10 years.