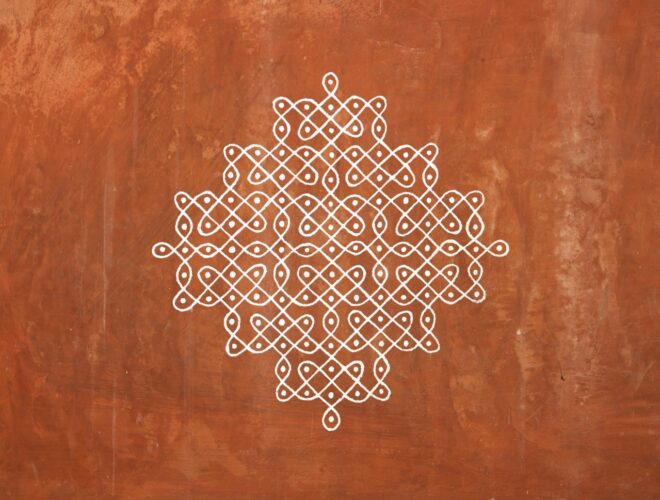 The Divine Art of Kolam: Sacred Geometry and Cymatics

We celebrated heritage week from Nov 19th – 25th, and that meant celebrating every aspect of Indian culture and heritage.

This December 10th at 6PM, we invite you to our webinar on The Divine Art of Kolam: Sacred Geometry and Cymatics.

Kolam is a more than a thousand year old living tradition that stays in almost every household. It is a ritual for Indian women to wake up at early hours of the morning to draw a beautiful kolam in front of their houses.

Scientists and mathematicians often talk about elegant equations or proofs that are simple yet profound, representing secrets of the universe, through their intrinsic beauty and various interpretations. Similarly, Kolams are ancient drawings with patterns that are aesthetically beautiful and mathematically inclined, while also representing deeper philosophies and life lessons – Shanthi Chandrasekar

This webinar, we have Dr Deepa Duraiswamy, Smt Shanthi Chandrasekar and Prof Oscar Garcia-Prada, speaking on aspects of Kolam ranging from mathematics, art, science and finally delving into the divine. 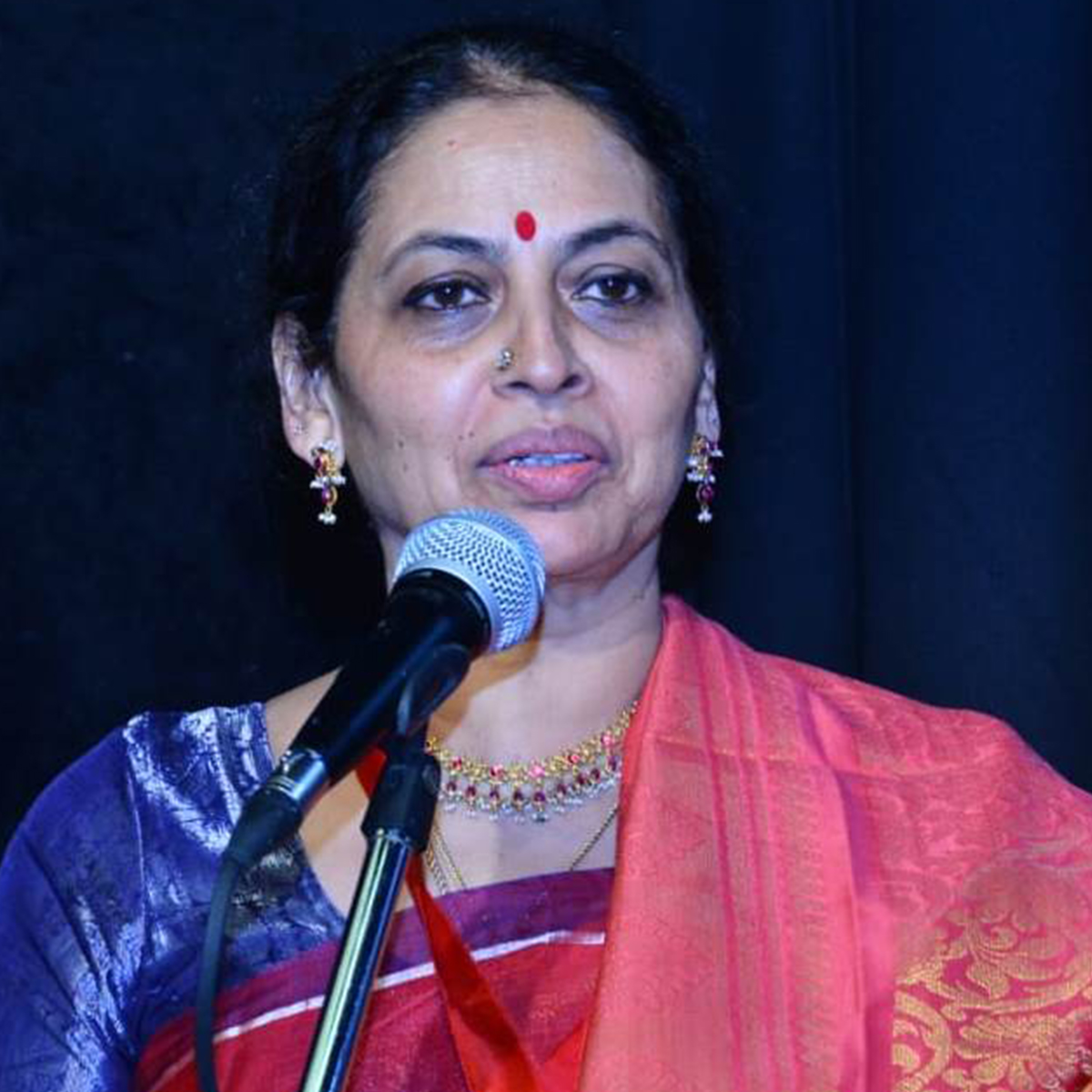 Vijayalakshmi Vijayakumar is the Co-Founder of Center For Softpower and the founder secretary of Heritage Parampara a not-for-profit trust. She has flown powered aircrafts, played state level softball, danced Bharatanatyam, given talks on culture and heritage, organized conferences, been on the Central Film and Censor Board, the National Advisory Board for Philately and is a freelance designer and copywriter too. Heritage trust conducts two annual well-known festivals, Gudiya Sambhrama and Srishti Sambhrama, the Earth Mother Festival. A third festival that premiered in 2018 was The Heritage Drive, a 1100 km motor sport rally that took participants to heritage temples and included tree planting as well. She loves story telling, her approach is creative and innovative. She is presently writing a novel based on historical events in India 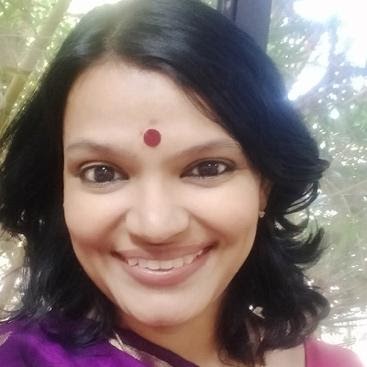 Dr. Deepa Duraiswamy holds degrees in engineering and management from the University of Pune and IIM Calcutta. Her desire to understand the āgama-s and make them more accessible for a modern audience led to an interdisciplinary Ph.D. on “Temple Management in the Āgamas” at the Department of Sanskrit, University of Madras that is now published as a book by Indic Academy. She has taught an introductory course on Śaiva Siddhānta at the Department of Saiva Siddhanta, University of Madras. She hopes to continue exploring this ancient system that seems to be at the core of sanātana dharma in practice. 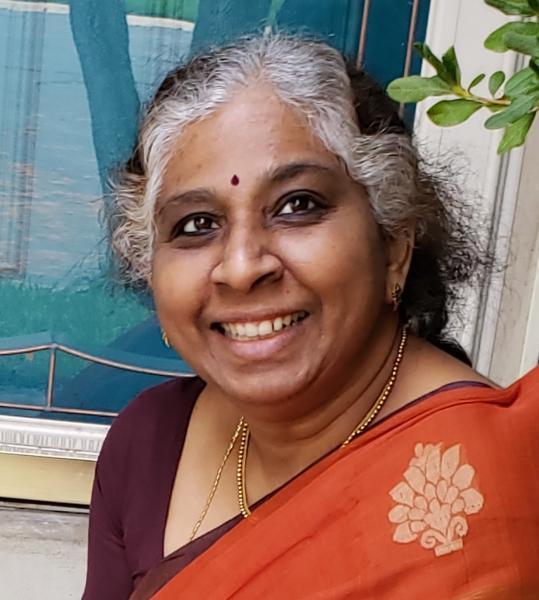 Shanthi is a Maryland artist who has been drawing and painting since early childhood. Her interest in understanding different media has led her to experiment with sculpture, photography, printmaking and papermaking. She has also been trained in the traditional art forms of Kolam and Tanjore Style painting. While many of her works are influenced by her Indian heritage, her true inspiration comes from the mystery and majesty of the world around her; her muse lives where the scientific overlaps with the spiritual. Shanthi’s works have been displayed in a variety of locations in the US and India. She won the Maryland State Arts Council Independent Artist Award in 2021 and Individual Artist Awards in 2013 and 2016 for Works on Paper. She recently launched an exhibition, Thalaimuraigal- Three Generations of Kolam at the Gandhi Memorial Center from November 12- December 31, 2022. The exhibition features her mother's, her daughter's and her work, all inspired by Kolams. The show was curated by her daughter Aishwariya Chandrasekar. 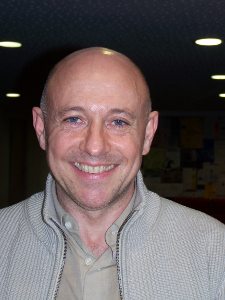 Oscar García-Prada is a CSIC Research Professor at Instituto de Ciencias Matemáticas— ICMAT. After holding MA degrees in Theoretial Physics and Mathematics, he obtained a D.Phil. (doctorate) in Mathematics at the University of Oxford in 1991, and had postdoctoral appointments at Institut des Hautes Études Scientific (Paris), University of California at Berkeley, and University of Paris-Sud, before holding positions at University Autónoma of Madrid and École Polytéchnique (Paris). In 2002 he joined the Spanish National Research Council (CSIC). His research interests lie in the interplay of geometry with theoretical physics. He participates regularly in public outreach activities on mathematics and their interactions with physics and music, collaborating with the newspaper EL Pais, El Mundo, Spanish Radio Exterior, Spanish television RTVE and other institutions in Madrid. In parallel with his mathematical work, he carries out a musical activity, singing as a countertenor specialised in the early music repertoire, offering recitals in several countries in Europe, USA and Asia. His connection to India went beyond academic collaborations. Thanks to his wife (visual artist and anthropologist, Claudia Silva), he was introduced to the art of Kolam, and started investigating its mathematical aspects.